A selection of Team 5 students were lucky enough to experience Waitangi during Term 3.

One of the highlights for our students was the fact that they got to walk in the footsteps of many of our ancestors.  It was an amazing experience for them indeed!

A special thanks to Mrs Lagitupu who organised students to put this movie together.
Posted by Ms Tito at 9:15 AM

Feel free to give the students some feedforward / feedback. 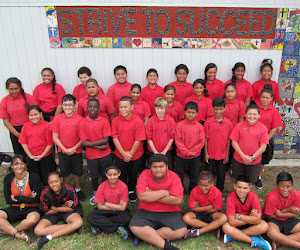 Kia ora and welcome to our blog. We are a class of Year 7 and 8 students of Pt England School who are striving to succeed. Our blog name reflects our desire of setting a standard for excellence in our educational pathways for school and beyond our classroom. Te Rerenga Taki, learning which can only be measured by students personal drive and input. The navigator of our Waka is Ms Tito.

This is who's checking US out!

Māori@PES by Pt England School is licensed under a Creative Commons Attribution-NonCommercial-NoDerivs 3.0 New Zealand License.
Based on a work at http://pestito.blogspot.co.nz///.